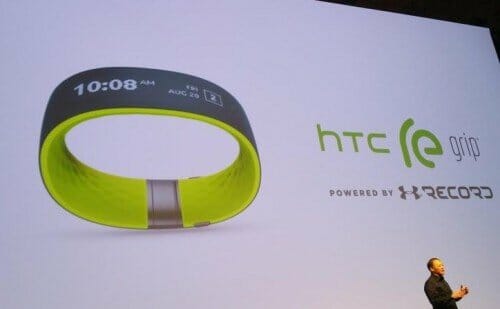 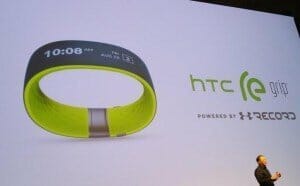 With the technology that is recently being announced it is not possible for a company to have a new smartphone without some way to connect to a device that tracks your fitness.  Many people have heard of and own the new FitBit that was all the rage during the holidays and continues to be popular to this day.  Now HTC has joined the ranks of companies with a fitness tracker.  This device is called the HTC Re Grip.  To learn more about this device you should read below.

What Is The HTC Re Grip

The HTC Re Grip is a smart band that is marketed towards people who like to run and go workout at the gym.  This band can be worn on your arm while you are exercising.  It will track your fitness as well as being a GPS band and a smart watch.  You will find that this device will look a little like the Nike + Fuelband and even the low-resolution display that is built into the bank will look similar.  However the Re Grip is larger in size and many say that it is much more comfortable to wear.

The Appearance Of The Re Grip

If someone who was not familiar with the Re Grip were to see it, he or she would probably be able to identify it as a sports tracker due to the bright neon yellow color on the inside of the band.  It is also equipped with sensors throughout the band that will measure your movements when you are running, cycling, as well as many other different activities.  One of the capabilities that this band has that you cannot see is that it has a built in GPS that is able to track your location when your smartphone is not with you.  If you jog or run outside you might like this feature as a safety feature.

Partnered With Under Armour

When you have a device that is a wearable tracking device it will require that there is an accompanying app to go with it.  When HTC brought the idea to have a device such as this the decision was made to not start from scratch.  It was decided that they have a partnership with Under Armour.  If you are looking for the app that works with this device you can find it on the iOS, Android and the web systems.  However it is important to mention that this is not something that is involved with Apple Health or Google Fit as of yet.  It might be in the future.

If you are looking for a device that includes a heart rate monitor the HTC Re Grip is not the device for you.  The reason for this is that the company did not thing that the wrist monitor for heart rates would provide accurate information.  People who are deep into sports typically believe that accuracy is something that is very important.  For this reason HTC will recommend that you purchase a chest strap from a different company that you can use while using the HTC Re Grip.

A popular feature on the HTC Re Grip is the GPS tracker.  When the GPS is turned on the battery life of the device will be about five hours.  Even though the battery life does not last very long when your cell phone is not with you it can provide you security to track your movements.  When your cell phone is near it will even be able to display your incoming calls and notifications on the screen when they come into your phone.

If you are interested in a wearable device that tracks your fitness as well as having a GPS to track you if something were to happen many would recommend the HTC Re Grip.  It will not break the bank and will offer everything that you are looking for.