The 3D printer is a machine that we hear more and more about daily and is about to invade the traditional industry, but most importantly, to create a new type of industry: the collaborative industry still called the Makers. Here are some great 3D printing innovations advancing all the time. So, how do 3D printer works and why is this process as revolutionary as it says?

The principle of 3D printing

A carpenter creates a functional wooden piece by removing material from a block of solid wood. Just as a machinist will create a metal piece by machining a piece of metal larger in volume and weight than the final piece.

In contrast to these methods, 3D printing works by localized addition of material to create only the final functional part. There is almost no loss of raw material (except for the supports or the part printed).

Concretely, how do the 3D printing machines work?

To make a physical part in 3 dimensions, all machines have a support tray for printing the part and a nozzle or print head that moves in a plane to print the material.

The machine prints in a single plane at each step and it is the stack of these plans that create the volume of the printed part.

The main types of 3D printing

The most common method is FDM for Fused Deposition Modeling, which consists of depositing a molten plastic filament on the printing plate or on the part being printed.

A nozzle moving in a plane extrudes a hot plastic filament which is melted down and bonds itself to the previous layer.

Most consumer 3D printers use this process. Using plastics such as PLA or ABS, they can be used for rapid prototyping or to produce functional parts for DIY, decoration or model making.

This process begins to reach the general public with printers like the 1200 Project or the Formlab 1 and 2 which if they are destined to the professional sector are also affordable for individuals.

This SLA process for StereoLithography Apparatus combines a liquid photosensitive resin with an UltraViolet light beam to solidify the resin.

At each printing layer, the machine exposes UV liquid resin which then solidifies and bonds to the previous layer of resin.

This process has been used in the dental and jewellery sector for some years now.

This process is still confined to the industrial sector because it involves implementation and significant costs for an individual.

This SLS process for Selective Laser Sintering uses a laser to melt a powder that melts will bond to the previous layer.

This technology makes it possible to work both wax and metals and the first functional metal parts of the industry are manufactured by this process.

How to pilot a 3D printing machine?

Unlike machining centres used in industry, 3D printers are not manually controlled, they work exclusively autonomously.

The part to be manufactured is first modelled with the help of CAD software.

The 3D file of the part is then processed by a slicing software that will cut our piece into slices, each slice representing a different sectional view of the modelled part.

Of course, the more layers of printing, the better the surface quality of the piece will be.

This STL file is then sent to the 3D printer which will print successively all the slices of the part to arrive at the complete physical model.

The process of 3D printing in images example in jewellery

The production of parts by the 3D printing process begins with the computer modelling of a model.

In this case, it is a ring modelled with CAD software from Vivalatina-Shop jewellery collection. 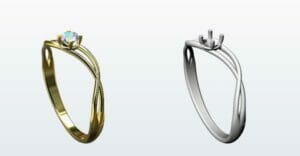 Views of the ring in virtual photo and CAD

The 3D model of our ring is saved in STL format before being sent to a software interface of the 3D printer. 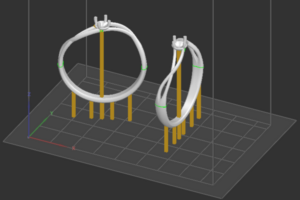 Visualization of parts on the printing plate through the printer interface software.

This control software the 3D printer will cut the environment of the printing plate (parts and their supports) in slices and send them to the 3D printing machine which will print them successively. 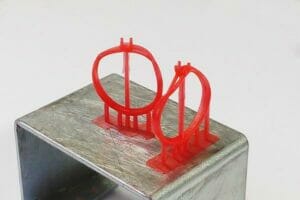 View of the resin model printed by 3D printing.

The printed part is then detached from their support to pursue the manufacturing process.

View of the finished product made from the 3D printed master.

The costs of a 3D printer

When buying a 3D printer, the price comparison of machines should not be limited to the purchase price. These printers require consumables that can be expensive and hidden costs that are not visible at the time of purchase.

For FDM-type printers, for example, although they use affordable raw materials, refill cartridges can be resold much more expensive than the market price by the manufacturer.

Some manufacturers integrate electronic chips on their cartridge allowing the machine to use them and forbidding the user to use third-party cartridge providers.

For 3D FDM printers, be sure to check that the machine accepts materials from a third-party vendor, and compare the price per kilogram of refills according to the printer models.

Example of FDM printer refill cartridges including the printer’s extrusion nozzle and limiting the possibility of refilling by third-party suppliers.

For SLA type printers, the cost of the resins can vary from 200 to 1300 dollars per litre depending on the recreational or professional use of these resins. Again, some manufacturers force their customers to use their resin by integrating a chip on the refills of the machine. 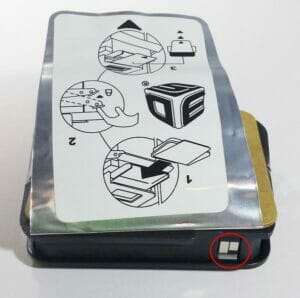 On the other hand, the Formlab requires to change regularly the printing tank which generates a cost whereas the 1200 project, by the use of interchangeable cartridges avoids that.

Photo showing a 1200 project printer cartridge with its chip